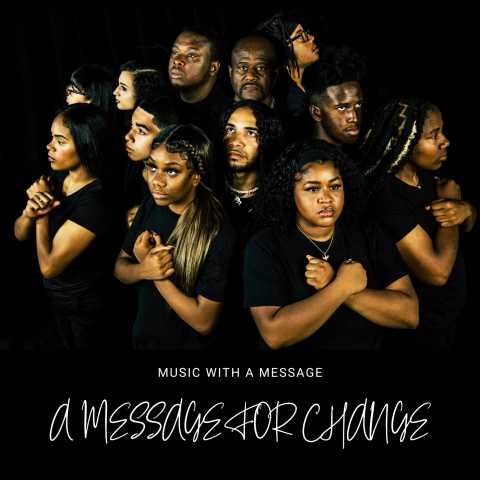 A multi-talented group of youth vocalists, musicians, and lyricists announced today the release of A Message For Change, a self-produced album tackling retaliatory gun violence and stories of loss, and suicide, but focusing on the importance of never giving up.

The Bronx-based “Music With a Message” band, with performers aged 11-20, confront close-to-home issues with a commitment to kindness and a vision for what their community could be.

Tracks include “Kindness,” an uplifting message promoting the power of treating one another better, as well as “Care For Me”  a reflection on racial justice, parent involvement, and lives taken too soon.  When asked why they wanted to produce this particular project, the reaction from the musicians was emotional and personal:  “I grew up seeing a lot of violence, going through a lot of violence… you never know what children go through at home,” said one young band member. “I think this project and its messages are going to be very eye-opening for a lot of parents and teens” added another.

The band is a product of the Renaissance Youth Center, a beacon of hope and opportunity in the South Bronx. Situated in the poorest congressional district in the country (NY-15), Renaissance shows young people what’s possible, increasing self-belief while sparking new passions. Low or no-cost programming is available for children as young as 3 including dance, music, and vocal instruction. They also offer free classes in STEM eg; robotics, coding, agriculture, zoology, etc. in addition, to civic engagement, and mentorship.

Music, though, has always been “critical to the Renaissance mission,” according to co-founder & President/CEO Bervin Harris. “Music brings about a feeling, but it also brings information. I have eight brothers and sisters. I’m the second youngest, the first to graduate high school, and the only one to go on to college. My parents fed me, I had clothes on my back, but they never came to school, they never saw me play sports, they never saw me play the keyboard or sing a song. I didn’t even know what family looked like until I got to college and lived with a friend for the summer. Music can help our young people share their stories, their feelings, and have someone truly hear them… and often heal them”.

Since the organization’s founding in 2001, over 20,000 students have gained basic proficiency in music, and each April, auditions take place to form that season’s 25-member Music With a Message band. The group has upwards of 50 summer tour stops and has played in prestigious venues including Yankee Stadium, Carnegie Hall, Lincoln Center, the Apollo, NYC Summer Stage, and more.

But the real reward of live performance is the chance to connect with communities and provide young people a platform to lead the conversation.

“To all the young people, your voice is what’s missing in the conversation, your presence is what’s missing at the table, and if nothing else, we’re gonna start that,” said Harris. “We need to do it on a larger, broader scale, and I think it starts right here.” Several incredibly talented, world-renowned, producers and engineers helped the students to produce and mix the album. Bob Clearmountain, the recording engineer for such luminaries as Bruce Springsteen and David Bowie, among many others, provided engineering and mixing services. Michael Ashby, Akihiro Nishimura, and E-Bass also provided fantastic engineering assistance, mixing and mastering various songs on the album. The world-renowned Power Station recording studio in Manhattan also opened up its doors for the band to record some of the songs at the studio.

The band will hold an album release showcase at the Renaissance Youth Center on August 6th, 2-4 PM. RSVP

Exploring the Vulnerability and Heartache of First Heartbreak...