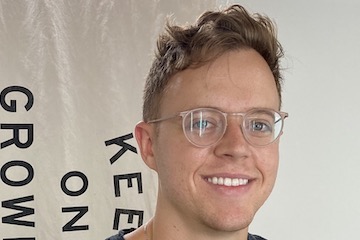 Braxton Manley was a sophomore at Texas Tech University in 2017 when he attended a workshop on entrepreneurship. The purpose was to conceive a product based on market research.

“My idea was cool Apple Watch bands,” Manley told me. “It was the first generation of Apple Watches. Apple designed the watch to have interchangeable bands. Only standard bands — black, brown, silver — were on the market. I saw it as an opportunity to get creative.”

Manley’s idea garnered a $5,000 grant from the university. Fast forward to 2021 and his company, Braxley Bands, is a direct-to-consumer seller of elastic, colorful bands in eight sizes and 25 or more designs. Sales have soared.

I recently spoke with him on how it all started, how he manages surging demand, and more.

Our entire audio conversation is embedded below. The transcript that follows is edited for clarity and length.

Eric Bandholz: Braxley Bands has one of the coolest-looking websites. It’s like 80s vintage.

Braxton Manley: It’s supposed to evoke a retro thing. We started on Wix. It was the cheapest option. We didn’t know anything about ecommerce. So we designed our own site there, and it’s evolved over the years. But we’ve always kept the playful, colorful theme.

We’re on Shopify Plus now. We worked with Fuel Made, the development firm, to customize it.

Bandholz: You have a great story.

Manley: I was a sophomore at Texas Tech in 2017. I attended a program there called 3 Day Startup, which is a weekend workshop to learn about entrepreneurship — develop an idea, research the market, and come up with a viable product. Then you pitch to investors on that Sunday.

My idea was cool Apple Watch bands. It was the first generation of Apple Watches. Apple designed the watch to have interchangeable bands. Users can swap the bands in three, four seconds. But only standard bands — black, brown, silver — were on the market. I saw it as an opportunity to get creative. I went through that workshop and developed the product.

The name Braxley Bands was not my idea. I assumed we would come up with something better. Then it got too late, and we just ran with it. “Braxley” is a combination of my first and last names.

After that class project, I got with my buddy Grant, who I met on campus. He had taken a sewing class in high school to meet girls. He was a sewing expert. I was trying to figure out how to stitch socks, which we were using to make the bands.

He was a wizard on my sewing machine. I had borrowed it from my grandmother. So Grant and I partnered up. We started selling them through Venmo to our friends at Texas Tech. We spent $20 on socks. We bought the metal components on eBay.

Bandholz: Socks, as in off the shelf?

Manley: Yes. Socks with cool patterns that were thick — just the crew [upper] part. Eventually we transitioned to a better material, a woven polyester that’s sturdy and flexible yet machine washable. Our bands are elastic and stretchy, making it easy to move the watch on a wrist. Also, we can print on the material with all kinds of cool patterns.

We now have a lot of SKUs. We had four sizes. Then Apple made our lives difficult by coming out with two watch dimensions. So we have eight sizes of bands with 25 to 35 designs. That computes to a lot of SKUs.

Managing the inventory is tricky. There are months when a popular style or size will be sold out. I’m learning.

Bandholz: Your business achieved early traction. Did you stay in college?

Manley: Yes. There’s this romanticized idea about entrepreneurs dropping out. But universities are catching on. They’re actually empowering students to be entrepreneurs. Texas Tech was good in that way. It created a sort of incubator called the Innovation Hub. That’s where it hosted this weekend workshop.

Going to school and staying in school, even though we had a thriving business, was the best thing we could have done because it gave us an office. We won a $5,000 grant early on through the university, which generated good media coverage. I don’t think we could have succeeded if we weren’t in a university.

Bandholz: What happened to all the people who worked on the project?

Manley: We just parted ways. I was taking it very seriously. It was my dream. It ended up just being me. Grant came later. He wasn’t a part of the original project, but we partnered up.

We just hired my younger brother, Zach, to take on various roles. He’s a numbers guy. I’m more creative. So we balance each other out.

Bandholz: How are you guys divvying up the work and evolving the product?

Manley: Grant is focused on today. I’m focused on tomorrow. Grant deals with customer service, fulfillment, and advertising. I’m dealing with the creative side and inventory: the brand, new designs, the supply chain, making sure we have enough product coming in.

The product has stayed largely the same since we launched. We’re getting amazing reviews where people are shocked by how much better our bands are. We see no need to change them.

But we hope to evolve the company by designing extraordinary elastic products. We have two things in the prototype stage right now. One is a utility belt — basically to match the band. The idea is to apply an elastic waistband to any pair of pants.

Also, hats. Fitted hats are comfortable, but they don’t look that great. So we’re combining the traditional snapback style with fitted elastic.

Those are two things we hope to launch by the fall of 2021.

But the Apple Watch band market is massive. It’s the most popular watch in the world in terms of units sold. The great thing about our bands is people often buy a dozen styles for different outfits and uses. We haven’t reached our maturity with the Apple Watch bands.

Bandholz: How are you acquiring customers?

Manley: It’s always evolving. Snapchat is performing the best as far as advertising. Snapchat is amazing for us. It’s the product-market fit. We’re really popular among younger adults, even though grandmas love our bands, too. Snapchat is the number one app for people in high school and college.

Bandholz: Walk me through advertising on Snapchat.

Manley: It comes down to knowing how short an attention span is. The ads are product-focused images. The one that works the best for us is a band on a spinning lightbox, close up. You can see the fine texture of the band, which is spinning really slowly. We have cool music behind it. We list a few key features, such as “Machine washable, lightweight, 30 designs, one band sold is one tree planted.”  Or, “Watch band of the future.” The key is to keep it simple.

When they click on the ad, users go to our home page, although we’re working on dedicated landing pages.

Bandholz: Is Snapchat better than TikTok?

Manley: TikTok is just different. Both are more popular than Instagram and Twitter. Younger kids message on Snapchat. They don’t even use Apple’s iMessage.

TikTok is pretty good for us, mainly via organic posts. We’re not advertising there yet because the targeting isn’t good. We have to target Apple Watch users. It’s difficult to find that niche, especially on TikTok.

But, again, organic TikTok is great. We recently posted two videos. One of them has over 250,000 views in roughly one week. We attribute our best sales day since Black Friday to that video.

Our TikTok videos are easy. Nothing fancy. We make them seem casual and real. It took me 15 minutes to make one. I said something like, “Hey, I’m about to show you a game-changer for your Apple Watch.” Then I took a shot at my wrist and spoke for about 30 seconds about why the bands are great. Simple.

Bandholz: Do you sell on Amazon?

Manley: No, I’m an anti-Amazon guy, as you are. You’ve got to own the relationship. We’ve thought about it, but it doesn’t feel right. We’ve had such good sales on our own website that we can barely keep stuff in stock.

Nobody buys on Amazon because of the brand; it’s because of the price and the reviews. Buyers have no idea who made it or the story behind it. You can build a very profitable business without touching Amazon. You don’t have to be there.

Bandholz: Your bands are made in China.

The quality coming from China is much better. So it the communication, ironically. We found a good factory. We’ve been working with these people for about three years.

Bandholz: Have you gone to China?

Bandholz: Where can people learn more about you and Braxley Brands?

Bitcoin ETF Roars in Debut With $165 Million of Trading Volume

To Drive Conversions, Spy on Competitors

Editorial Newsletters Are the New Blogs