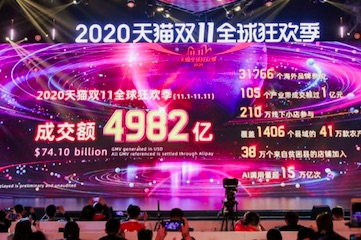 For 2020 Singles Day, American brands were the top international sellers to Chinese consumers, contributing $5.4 billion to the total. More than 250,000 brands participated this year, including 31,000 foreign brands.

Chinese consumers spent more on domestic goods this year, especially technology products, while foreign health and beauty items continued to sell well as they have in the past Singles Day events. Chinese shoppers now view domestic technology products as good as or better than foreign brands.

Well-to-do Chinese consumers are known for stocking up on luxury goods when traveling to Europe and the United States. Covid-19 has curtailed that travel. So Chinese consumers have turned to ecommerce for their overseas purchases. Consequently, this year several major luxury brands, including Balenciaga (Spain) and Prada (Italy), signed up for Singles Day on Tmall for the first time.

In total, around 200 luxury brands joined in — more than double last year’s figure. In prior years luxury brands were reluctant to participate, believing it would damage their reputation. This year, with overall sales down due to the pandemic, and with Chinese shoppers comprising a large percentage of global luxury buyers, high-end brands overcame their concerns.

For example, jeweler Cartier hosted its first live-streaming show, showcasing a $28.3 million necklace. The Chinese economy has already started to recover from the pandemic, unlike E.U. and Western economies. For example, Alibaba’s third-quarter revenue was $22.8 million, an increase of 30 percent over 2019.

China has been at the forefront of live video streaming over the past several years. The pandemic has accelerated that trend. Live stream shopping is a mix of entertainment and ecommerce. Viewers buy from hosts and celebrities who showcase products in real-time videos. Hosts can give their fans discount coupons and flash deals in real-time.

The Chinese government estimates that during the first six months of 2020 more than 10 million ecommerce live-streaming sessions were hosted online. Shanghai-based iResearch Consulting Group estimates that China’s live-stream shopping market was worth $66 billion in 2019.

Cainiao, the logistics arm of Alibaba, commissioned more than 3,000 chartered flights and long-haul cargo ships to bring foreign goods into China. It also flew more than 700 chartered flights to deliver orders outside China. Cainiao also secured over 10,000 mobile lockers in China so customers could pick up their purchases without human contact. Cainiao processed 2.32 billion delivery orders over the 11 day period.

Sit Down with Amy McCord Jones of Flower Moxie